Softball finishes off their winning season with a loss to Heritage Catoosa in the State Championship. 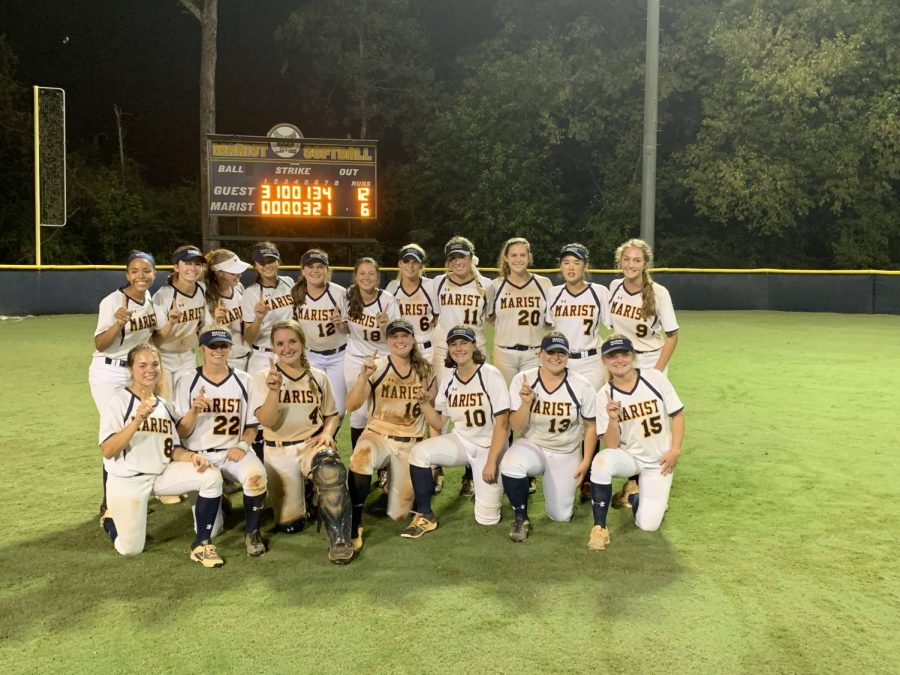 Every fall, the War Eagles softball team hits the field. They play hard from the first practice in early August to the last game in Columbus, Ga., in late October. This year, the season started with our first practice on July 31 at Blackburn Park and ended on October 28 against Heritage Catoosa in the state championship.

Most weeks, the softball team has at least two games as well as practices on every day there wasn’t a game. Region games were played on Tuesdays and Thursdays. Each year they have to play each region team twice, once at home and once away. For those keeping score at home, that’s four trips to the Gainesville area and one short ride to scenic Helen every fall.

For the non-region schedule, the team plays opponents like Lovett, Wesleyan, South Forsyth, and Buford. Additionally, every year they take a trip up to Chattanooga, Tenn., to play some really good teams. These are teams of the caliber Marist likely would play down south for State, so the trip is a way to get them used to better competition than they might see in the region, and also to have the experience of playing doubleheaders like they will in the Region and State tournament. This year, the War Eagles played Ringgold and Rockmart in Chattanooga, and both of those teams would eventually make their way to Columbus for State.

The region tournament is usually the first week of October. Marist’s biggest rival is Flowery Branch, who moved into the region with Denmark in 2018. For the past two years, the War Eagles have played Flowery Brain in the region championship, with Marist winning both years. In 2018, the games were extremely competitive, one-run contests, but this year Marist shut them down, winning the championship 10-3 and 12-6. The region tournament was extremely important because a win meant that the team would be able to host both rounds of state and not have to travel long distances to play.

After the region, the team plays two rounds of state. If they won both rounds, they would get to go down south to Columbus for the Elite 8. Both rounds of state are doubleheaders. This year, they played Chapel Hill and Cairo and swept both teams.

In Columbus, there are eight teams from every class, 1A Private all the way to 7A. It is like the College World Series of Georgia softball. The senior class this year made it to Columbus three out of their four years. This year, Marist fell to Heritage Catoosa 6-3 in the state championship game, finishing 28-6 on the season and state runner-up.

Next year, come out and support the team at some games. They always love to have an excited student section!