20 Years Later: From Marist Senior to Dean of Students

An Interview with Ms. Laura McGregor ‘01 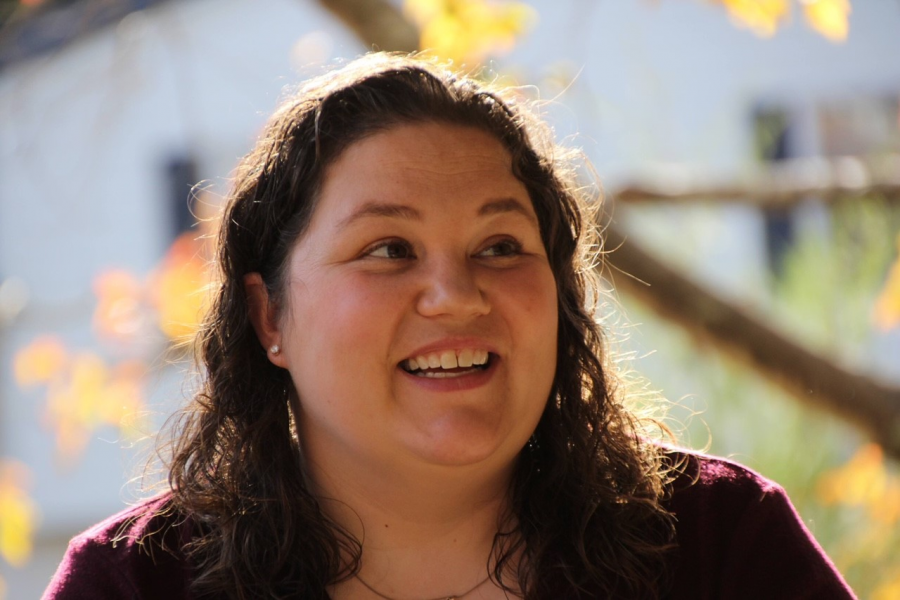 Laura McGregor, Marist Class of 2001, had no intention of returning to teach at her Alma Mater. Yet 14 years after first returning as a science teacher, she now finds herself as Dean of Students, filling the big shoes worn previously by Mike Trapani ’70.

Since returning to Marist in 2007, McGregor has taught biology and chemistry courses, worked in Campus Ministry, and served as the Assistant Dean of Students up until this school year. Recently, I sat down with her to discuss her Marist journey, from a senior receiving her diploma to now.

How would you say Marist has changed over the years, both in terms of the school’s identity and physical plant?

Yeah, Marist has definitely changed a lot from when I was a student to when I came back as a faculty member, and then even in the 14 years that I’ve been here since then, I think it’s still changed. I would say the two biggest aspects I noticed when I came back as a teacher was an increase in diversity and an increase in the focus on spirituality. Both of those were present when I was a student, but I noticed them so much more when I returned. They really became a focus of the school. Physically, Centennial, the Aquatic Center, and Ivy Street are all new over my many years here. We are not the same school as when I graduated in 2001, but we are not supposed to be, so that’s okay.

After you graduated from Marist, where did you go to college?

I went to the College of the Holy Cross in Worcester, Massachusetts, and I am glad I ended up at a small school. I knew my professors well, and they knew me by name. It was the right environment for me because I really wanted to get out of the South and have a different experience, and it is a different culture for sure.

So, when you left Marist, did you have plans to study education?

No, I was a biology major in college and initially wanted to go into medicine. But, I knew that I didn’t want to go straight into medical school, so I got a teaching job in Savannah right out of college. When it came time to apply to medical school, I could have spent my 20s in a hospital and in residency, or I could have had a job that gave me three months of vacation, so I took the job that gave me three months of vacation! There comes a point when having free time is worth more than money.

Since first coming back, walk me through the various roles you’ve held.

So many! When I arrived back at Marist in 2007, I was a chemistry and biology teacher for a while, then I moved into Campus Ministry for five years, and I was Assistant Dean of Students for six years, and then this year as Dean of Students.

Nice! And when you returned to Marist as a faculty member, did you have any “Marist Mentors,” other faculty that were helpful and influential in taking you under their wing?

You know, the science department is a really great department to be part of, and it was really neat to be taught by Mr. (Stephen) Lorys and then work side by side with him. Ms. (Elizabeth) Edwards was so patient with me when I had her in Calculus and is still so supportive to this day. Same thing with Mrs. (Tricia) Glidewell when she was here. It’s neat to come back and be able to work with people that were good teachers and now work alongside them.

Of course, my class, the Class of 2021, is making decisions regarding college right now. What pieces of advice would you give to us as we make these important decisions then go on to this next phase in our lives?

Go with your gut, not with what the people around you are doing. I think I felt a lot of pressure to go to [the University of] Georgia because that was in-state and where lots of people were going, but I knew I would have had a really hard time finding my place at a big university. So, going to a smaller school was the right thing for me. You don’t have to go with the flow. It’s okay to make the decision that’s right for you, not the decision everyone else is making. And the other thing is: your school is what you make of it. You get out what you get in. If you decide you’re going to make the most of your experience, you’re gonna need to get involved to feel like you’re a part of something. And most schools all have the exact same offerings except for a few weird, funky majors.

What favorite memories do you have at Marist, either from your time as a student or a teacher?

Our senior class didn’t really do a prank; instead, we got permission to spend the night on the front field as a class, and that was super fun! It will never happen again [laughter]; it did not end well for every member of our class. But it was a really good time. Also knowing that I still have friends from 20 years ago is comforting. We haven’t been to school together in 20 years, some of us haven’t lived in the same city in 20 years, but they’re still close friends. I don’t think that is everybody’s high school experience. And not to say that I’m friends with every single person from my grade, but the important people have continued to make a difference in my life. The fact that we all know each other’s history and know each other’s families in a way that maybe your college friends don’t.

I have to ask about the service dogs. What was the decision behind raising Ion and Jetson? What’s that passion?

I thought it was something that maybe we needed at Marist. There’s things that we’ve added around the school that add a little bit of levity. I think having the ELC here is just kind of nice! Even students see the benefits of that. And, you know, sometimes you just need a dog around to make you smile! We’ve done it before, but it’s been a long time, and Mr. (Kevin) Mullally agreed to give it a shot. It benefits us here at Marist, and then ultimately, it ends up benefiting someone who can gain more independence by having a service animal.

Choosing to return to Marist: you could have gone to any school, so why choose to come back here?

Never thought it was going to happen.

Oh, never! Mrs. Glidewell at the time was about to become Academic Dean, so there was an opening in the science department. She knew I was teaching science elsewhere, called me, and said to come interview at Marist. And I was like ‘No, thanks, I’m really happy in Savannah. I really like this place!’ and Mrs. Glidewell told me to come interview and give it a shot. So, I did. I left my interview and thought, ‘I still really like Savannah, so thanks for interviewing me, but I’m not going anywhere.’ This happened right before the 2008 recession, and when she called to offer me the job, things we’re starting to get icky in Savannah, so I ended up here. It was a five-year plan, so I thought ‘Oh, it’s just five years, and it will be nice to be in the same city as my parents for a while, and then I’ll move on.’ And yeah, I’m here 14 years later and counting [laughter].

Does that surprise you, where you are in your life right now?

Oh, I never thought I would be Dean of Students at Marist and take over Mr. Trapani’s job. That was never part of the plan. But, you make plans and God laughs at them, so you see what else is in front of you. Most importantly from this experience, though, are the people I work with: being in this role where I get to work with teachers and students and closely with Mrs. (Julie) Rogers and Mr. (Mike) Strickland. Working with Mr. Trapani for the past six years was incredible. He is one of the most selfless people I have ever met. So, no, this was never in the plan.

As you reflect back on your entire Marist experience, could you sum it up in a word or phrase just thinking about your time as a student and now a teacher for nearly 15 years?

You know, I think Marist sort of set me on a different life trajectory, which is not a one-word summary. But it certainly set the trajectory for my life. I was a public school student that came to Marist and didn’t know that you were supposed to capitalize the “G” in God, but I ended up going to a Catholic college and continuing my faith. I’m not sure if I would have maintained that throughout my 20s and 30s without having had some of these formative experiences like the retreat program in Campus Ministry. The decision to come here by my parents changed the path that I was on completely and prepared me for life.

Thank you, Ms. McGregor, for all you do everyday to make this school a home for even more students. We are undoubtedly grateful.