The Trial of the Chicago 7: Worth the Hype?

''This film is worth the watch." 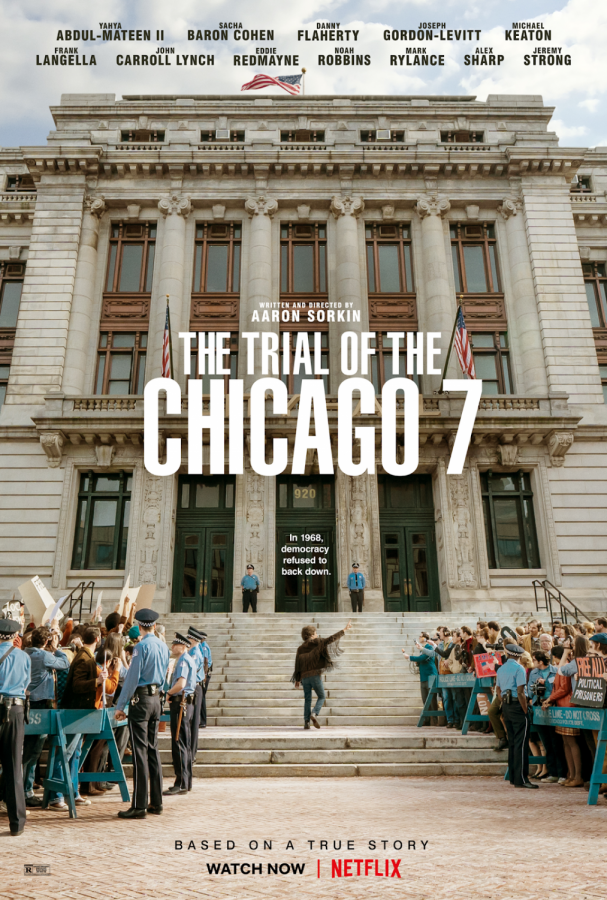 The fun outing of eating popcorn with friends in a crowded movie theatre has been banished by the pandemic; however, studios now release new movies directly to your laptop through streaming services. Don’t overlook Netflix’s “The Trial of the Chicago 7”; it was nominated for five Oscars and four Golden Globes, including winning the Golden Globe for Best Motion Picture Screenplay. It also won Outstanding Performance by a Cast in a Motion Picture and was nominated for Best Stunt Ensemble in a Motion Picture at the Screen Actors Guild Awards. Luckily for you, there’s still plenty of time to watch this notable film on Netflix.

So, exactly what is “The Trial of the Chicago 7?” Released on October 16, 2020, the film, directed by Aaron Sorkin, details the 1969 trial of seven people charged with inciting riots in Chicago at the 1968 Democratic Convention. Notable stars include Sasha Baron Cohen (“Borat”), Eddie Redmayne (“Fantastic Beasts and Where to Find Them”), Yahya Abdul-Mateen II (“Watchmen,” “Aquaman”), Jeremy Strong (“The Big Short”), Joseph Gordon-Levitt (“500 Days of Summer”), and John Carroll Lynch (“Zodiac”), and they all produce some of their best work in this film.

“The Trial of the Chicago 7” is a standout film of 2020 by being incredibly relevant today. For a movie set in 1969, all the issues feel like they could apply right now. Aaron Sorkin’s true talent is writing rich, complex scripts. In just two hours and 10 minutes, he tackles issues of racism, police brutality, corruption in the justice system, and the injustice of the war in Vietnam.

However, “The Trial of the Chicago 7” passes up the opportunity to go in depth on important issues surrounding the trial. Because of how complex this trial was, especially with the retrial, this movie would have translated better as a limited series in order to make it more historically accurate.

For all the complaints, this is an intriguing film. The central cast gives stellar performances, particularly Yahya Abdul-Mateen II as Black Panther Bobby Seale. Footage from 1969 news stations is cut into scenes of the riot, adding an extra layer of verisimilitude and immersion.

Did “The Trial of the Chicago 7” deserve the awards? Maybe not. 2020 produced many fantastic films, yet some were overlooked for awards. “Sound of Metal,” an Amazon original, only appeared a few times through award ceremonies despite being an emotionally gripping and unique film. The problem with “The Trial of the Chicago 7” is that it isn’t particularly unique. With all the other outstanding films that honed in on social issues and handled them spectacularly, Sorkin’s film leaves something to be desired and might not deserve all the wins. But it’s such an interesting film that it certainly deserves the nominations. Abdul-Mateen II was incredibly deserving for his nomination of Best Supporting Male Actor.

Regardless of whether you agree or disagree with the awards, “The Trial of the Chicago 7” does address one of the biggest trials in the history of the United States and zeros in on many complex issues that even extend to today. This film is worth the watch.