Soul: Pixar’s Most Mature Venture Yet 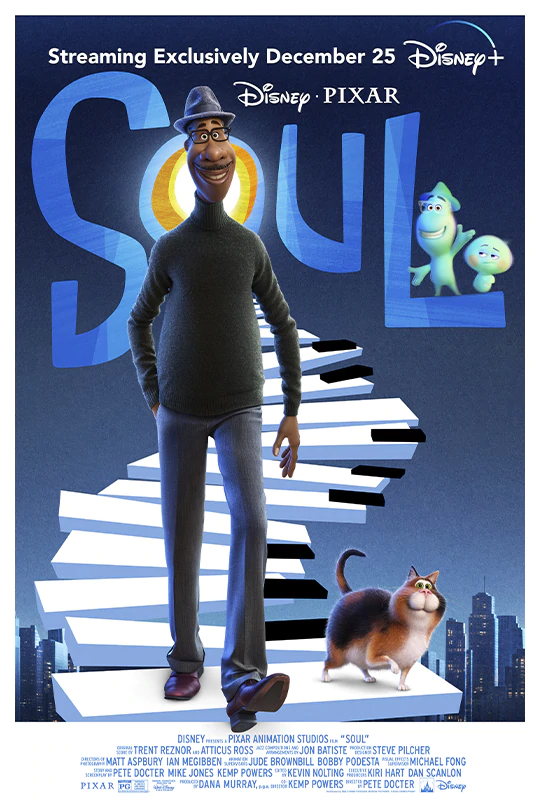 We all know Pixar never fails to throw a good contemplative film at us. Particularly with films like “Inside Out” and “Up” (both directed by Pete Docter), we have seen Pixar deliver entertaining films with deep and profound messages. There is no shortage of that in their newest venture, “Soul.” As Joe Gardner, an aspiring jazz musician, and #22, a soul with no aspirations to get to Earth, explore the meaning of life, Pixar succeeds once again, in an even more significant fashion.

“Soul” is perhaps Pixar’s most experimental feature yet, in that this film deals with the heaviest material: the meaning of life. As with “Inside Out,” to which this film is a sort of spiritual sequel, Pixar deals with the complexities of personality and what makes you, you—and very successfully, I might add. However, this film goes deeper into our “souls.” It deals a lot with calling and purpose— what we are here for or what we’re meant to do. It delves into how you develop your “spark,” which, as is described in the film, is your reason to live. Yes, there is delineation between your purpose and reason to live. The film tackles all of these heady spiritual issues with aplomb, thanks to the excellent script from Kemp Powers, Mike Jones, and Pete Docter. With the right amount of wit and grace, the film and its screenplay are able to weave through these complex and profound ideas smoothly.

Moreover, the film is very culturally significant and accurate. As one of the few American animated films with Black leads, and the first Pixar film of such, this film is historic, and I think it is one in which the Black community should be proud. There are several minor yet culturally specific things that are done right, particularly in the barbershop scene. The Black barbershop is often regarded as a staple of African American culture; “Soul” not only includes it, but also captures the environment that exists within it. I mean, even down to the one chair and barber that no one ever goes to: it was spot on. The credits list “Cultural and Music Consultants” that worked with the filmmakers to ensure things were culturally accurate, and I think that’s just fantastic.

There will be those who criticize the film’s representation based on how the story unfolds and decisions it’s main characters, particularly Soul #22, make, and without getting too much into it, I will say that the criticism is valid. The representation and literal dehumanization of black characters is a very important topic, especially in today’s climate. I am actually glad that people are starting to notice these things and go, “Well… that’s a little odd.” However, in terms of this film, I invite them to consider this: It’s not as bad as it is in The Princess and the Frog, a film where it’s lead black character is only black for 17 minutes out of the film’s 97-minute runtime. Though I do love that film, it is undeniably problematic. And though somewhat problematic, Soul certainly creates a less problematic situation to the point where, I feel, the film doesn’t lose any points. Outside of that, I don’t think there is anything in this film that invites criticism. This film is one of the best of the year, undoubtedly.

This voice cast is stellar. Jamie Foxx is a great voice actor, and I think he gives Joe a lot of life. The goes for Tina Fey as the voice of Soul #22 as well. I so appreciate the voice cast of this film—Foxx and Fey, obviously, but also Angela Bassett, Daveed Diggs, Questlove, Phylicia Rashad, and many more. I mean, if they gave out awards for best voice cast, this film would be the front-runner.

As with most Pixar films, the animation is stunning. This is possibly one of the most beautifully animated Pixar films ever. This film is also responsible for one of the best film scores, original music made specifically for the movie, of the year. Trent Reznor and Atticus Ross, Academy-Award winners for “The Social Network” (2010, dir. David Fincher), have crafted a film score that is ethereal and subtle and works very well for this film. The jazz arrangements and compositions by Jon Batiste are also noteworthy. They add a light and fun nature while also representing the film’s ambitious goals. 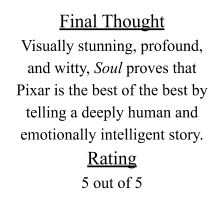 Overall, “Soul” is a sweet, gentle, and funny film (that Knicks joke was chef’s kiss). Is it my new favorite Pixar film? No. Is it up there? Very much so. “Soul” continues Pixar’s undeniable streak of incredible films, perfect for everyone in the family. I think that everyone will appreciate this movie and at least get something from it. This is one of Pixar’s best and one of the year’s best films as well.

For more reviews, you can check them out at onthereelwithandrew.com.